MUSIC FOR THE KING'S TRUMPETER

Pieces written for, or at the time of,
the Sergeant-Trumpeters to the King:


EDITED BY CRISPIAN STEELE-PERKINS
Please note:
the covers of the music delivered
can vary from those illustrated here


The Series
Trumpet “Tunes” and Sonatas were a popular feature of London’s Concert, Theatre and Tavern Entertainments in the late 17th and early 18th centuries. The music has survived in various forms together with documentation of specific perfor­mances, performers and the renumeration thereof. Some pieces remained in use, especially for instrumental instruc­tion, for over half a century, and more recently a few have been revived to become familiar wedding “Voluntaries”, even though their character, speeds and even composers’ name have been altered. Jeremiah Clarke, for instance, carefully prepared his popular melodies for performance on non-sus­taining keyboard instruments such as harpsichord and spinet; when transferred to the vast modern cathedral organs the “infilling” harmony notes cause the music to be slowed to half its original speed, so that “brisk” airs such as the Prince of Denmark’s March and Trumpet Tune (Song) become turgidly pompous and lose the vigorous energy with which they were sounded ca. 1700. At the correct speeds the ear is not offended by the 11th and 13th harmonics of the real “natural” trumpet and the tasteless over-ornamentation with which it has recently been fashionable to perform this elegant music becomes irrelevant and ­superfluous.

It may be helpful to bear in mind contemporary references to the trumpet playing of Shore, Grano, Douglas and others as being “sweet as an hautboy” (oboe) with a “chirruping” sound [Roger North] like birdsong.

Material for this series is frequently duplicated in several sources; where keyboard versions are consulted the “infilling” notes are restored to the simple harmony they imply, likewise where only two parts remain, the middle voices are recon­structed in the style of the time.

John Shore, Trumpeter, Lutenist and Inventor
London, being elegantly rebuilt after the Great Fire of 1666, was experiencing a cultural revival following the restoration of the monarchy: increasing commercial affluence attracted gifted and ambitious men from all over Europe, among them musicians seeking fame, fortune and patronage. One of their most notable benefactors was Princess Anne, queen from 1702 to 1714, daughter of James II, wife of George, Prince of Denmark, sister of Queen Mary and mother of William, Duke of Gloucester, a hypocephalic who died aged 11. For Glou­cester’s sixth birthday celebrations Henry Purcell composed an ode. The trumpet part, whose war-like tones particularly appealed to the young prince, was played on that occasion by John Shore, whose family were intimately acquainted with Purcell.

Although he had trained to follow his father and uncle into royal service as a ceremonial trumpeter, Shore had received a thorough musical education as a lutenist and instrument repairer. His father Mathias had married well and secured die lucrative administrative post of Sergeant-Trum­peter (a post normally held by a non-player). He also ran, as a speculative venture, The Folly, a barge converted into a floating house of entertainment and boasting 24 windows and 4 banqueting rooms. It was visited by Queen Mary in 1693 and at one time had its own landing on to the Thames Embankment.

Through mixing with the finest musicians who had emigrated to London from France, Italy, Holland and even Moravia, John Shore learnt new devices and techniques that gave his trumpet playing a control and agility considered unique. The demand for his services increased so greatly that he forsook military commitments to join the 24-piece court orchestra and also became a salaried member of Princess Anne’s oboe band.
English music of the period abounds with works for solo trumpet, almost exclusively inspired by Shore. Purcell particu­larly
from his connection with his family and his admiration of John’s performance on the trumpet, took every opportunity in his power to employ him in the accompaniment of his songs and other theatrical ­compositions.

Surviving news reports, advertisements and diaries attest his virtuosity as a soloist and in duet with his sister Katherine and other famous singers. In the early years of the 18th century, however, Shore

split his lip from sounding the trumpet, and was ever after unable to perform on that instrument.

He retained his salary as a lutenist and succeeded his uncle William as Sergeant of the Trumpeters in 1707. One result of his continued interest in music was his invention of the tuning fork in 1711. He lived the remainder of his 91 years in comfort and security. In 1749, to the consternation of his relatives, he married a widow, Mrs. Speed; they were jealous, no doubt, of the £15,000 he was to leave her on his death in 1753.

Guides to Performance
This music is really of a very simple nature, and should be treated as such. In performances with orchestra, an intelligent use of varied tone colours in repeated passages is advisable, leaving the trumpet out on some repeats, for example, as existing manuscripts do not necessarily specify when the trumpet should play. The orchestration of the minuets can also be varied, with for example just oboes and bassoons (if these are available) playing a repeat, or indeed an entire movement, to provide contrast for the listener. Tempi should be vigorous and ornamentation in general restricted to cadential trills (see above). In performances with keyboard, the melodic line should only be played on the keyboard instrument when the trumpet is resting.

The transposed Versions
Each piece in this series is available in its original key and two further transposed versions: in sounding B flat, so that a young player of medium capability can play the piece on a B flat instrument, reading from the natural harmonics, and in sounding F, to give beginners the opportunity to play Baroque music originally written for the trumpet, but within a range which they can accomplish. The purist may bear in mind that English “chamber” pitch was a whole tone flat in the late 17th century – their “C” would sound “B flat” to us. 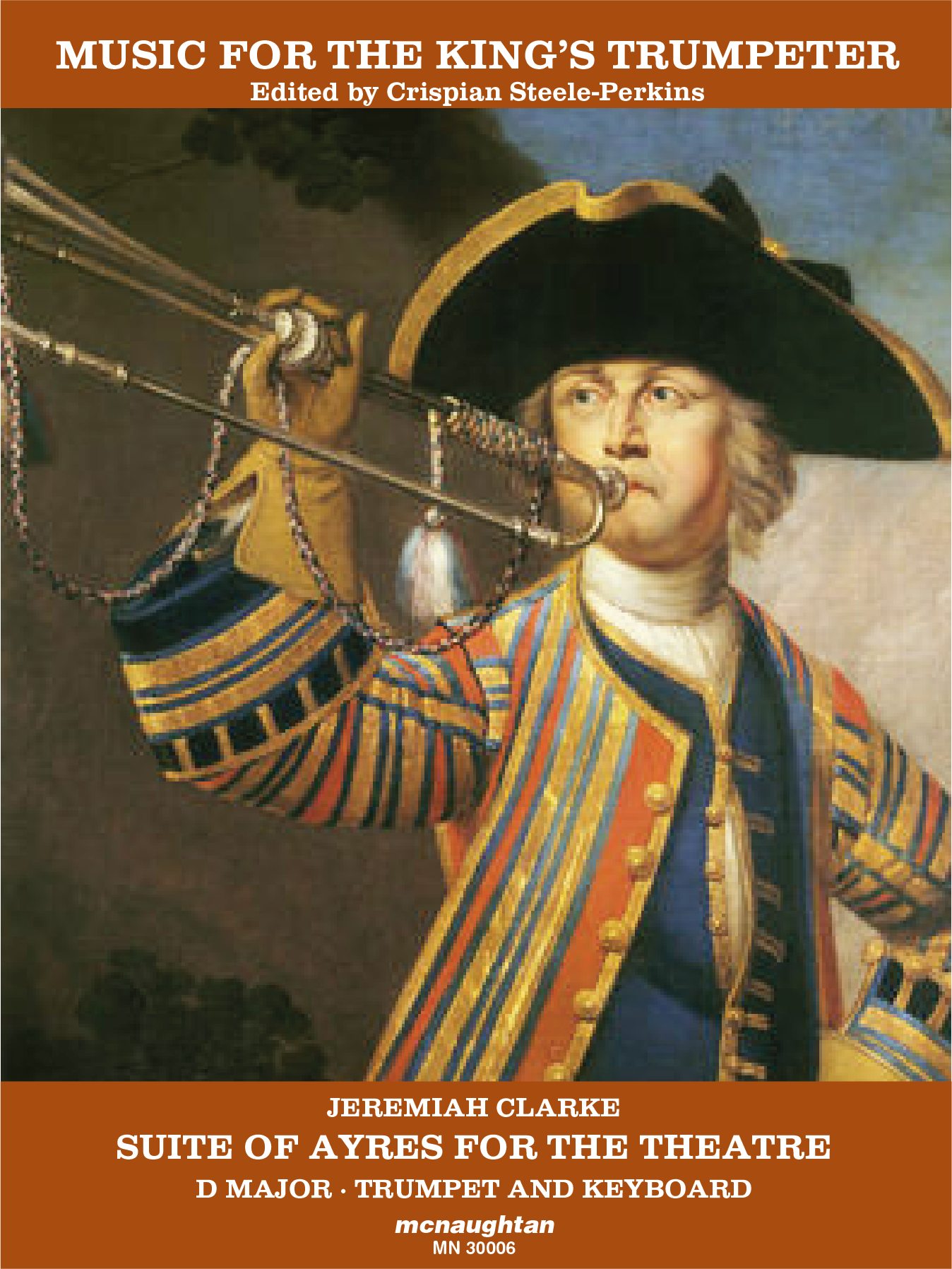 CLARKE Suite of Ayres for the Theatre 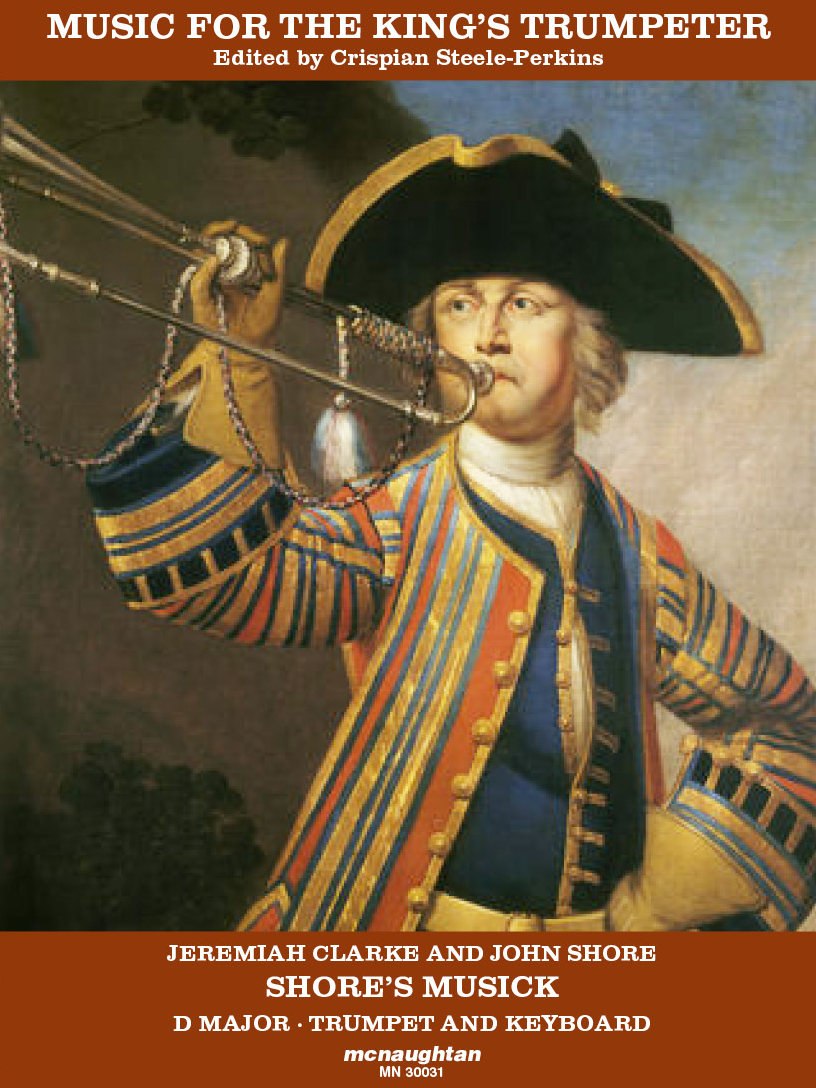 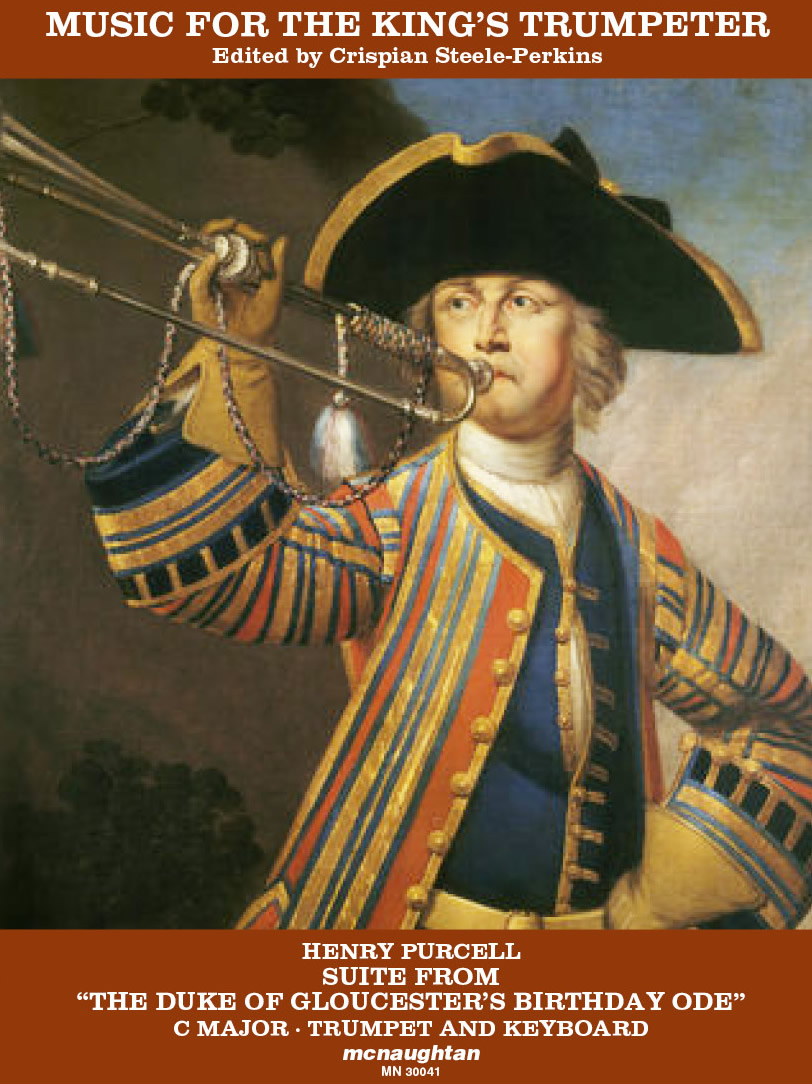 PURCELL Suite from "The Duke of Gloucester's Birthday Ode" 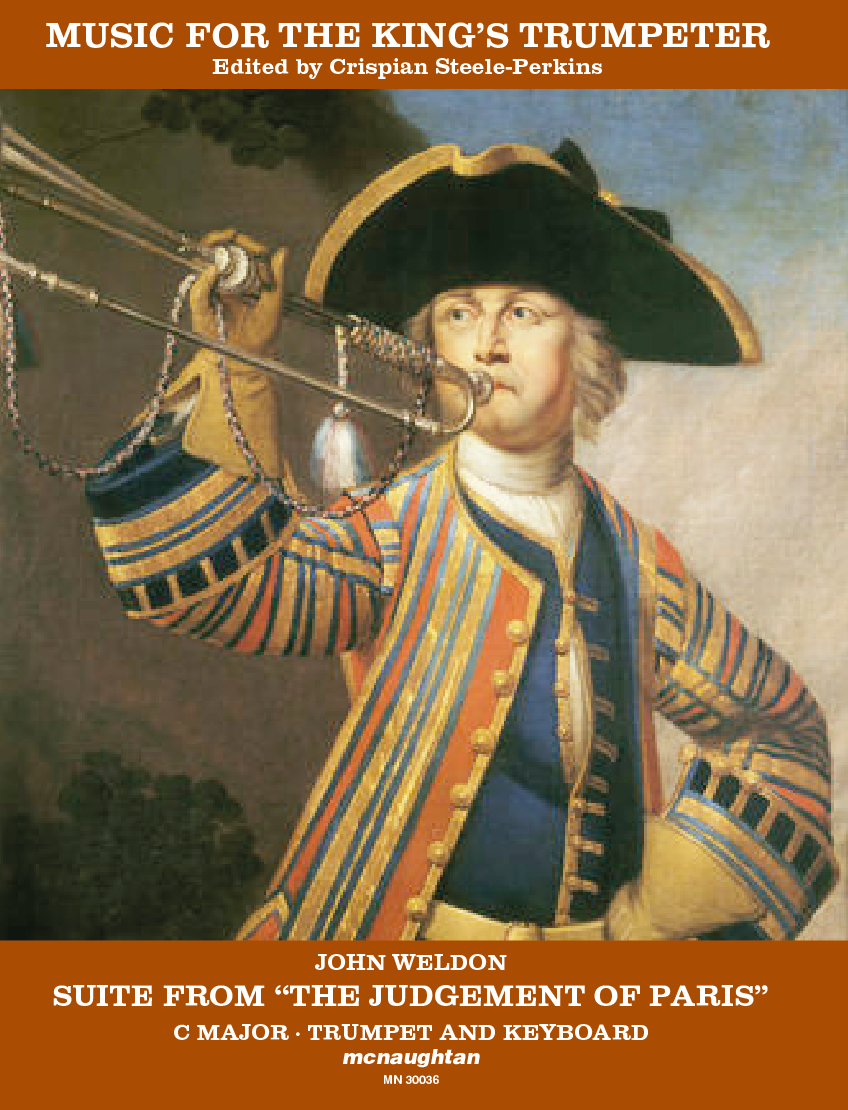 WELDON Suite from "The Judgement of Paris"